Another blazing fast SSD that leverages the PCI Express 4.0 bus.

Seagate is expanding its storage lineup with a couple of products it’s marketing toward gamers. One is a new generation FireCuda 520 SSD, and the other is the other is a FireCuda Gaming Dock.

Starting with the former, the FireCuda 520 SSD is one of a handful of drives that leverages the PCI Express 4.0 bus for incredibly fast read and write speeds. For sequential reads, it tops out at 5,000MB/s, which is par for course among current PCIe 4.0 SSDs. And for sequential writes, it’s rated to deliver up to 4,400MB/s. (The maximum throughput of an x4 Gen4 link is around 8,000MB/s, so we’re still not hitting that bottleneck at least.)

While Seagate is taking direct aim at gamers, the truth is, the best SSD for gaming is not a PCIe 4.0 drive when factoring in bang-for-buck (especially with Black Friday deals around the bend). It doesn’t even have to be an NVMe drive at all—even some SATA 6Gbps drives are just fine for a gaming PC.

Regardless, on paper, the FireCuda 520 series is extremely fast. In order to tap into that speed, you’ll need a motherboard that supports PCIe 4.0, and so far only AMD’s X570 offerings fit the mold (in the consumer space). So, it’s third gen Ryzen or bust if you want to fully utilize these kinds of drives. You can still install them on PCIe 3.0 motherboards, just the top-end speed will not be quite as high. 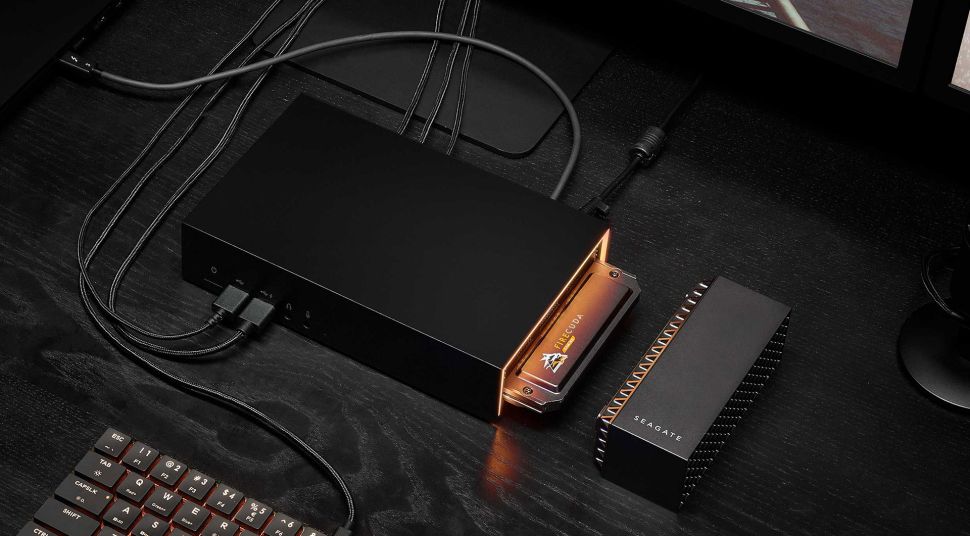 The dock connects to PCs via Thunderbolt 3. It also includes a spattering of other ports, including a Thunderbolt 3 accessory port, a DisplayPort 1.4 connector, a GbE LAN port, two 3.5mm jacks (audio-in/mic-out and audio-out), four USB 3.1 Gen 2 ports, and a USB 3.1 Gen 2 charging port. And of course it lights up.

Seagate has priced  the dock at $349.99 and says it will be available later this month. It’s backed by a three-year warranty.